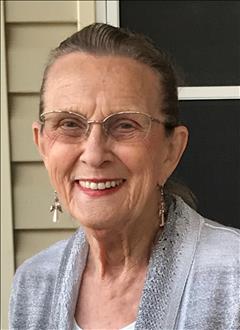 Rae Arlene (Beck) Oden (86) was born in Watsonville, California, to Ray and Evelyn Beck, the youngest of three children. She attended school in Watsonville, graduating early from high school with honors. Rae began working in the banking industry after graduation, all the while writing to an American GI stationed in Japan during World War II. These letters developed into a love affair, and in 1951, barely over 18 years old, she married her hero on one of his furloughs. From there on her life was filled with travel and adventure. Rae was the devoted wife of James Oden and mother to three children. During her marriage to a career Army helicopter pilot, she moved her family to many new homes, including a three-year tour in Italy. Each time her love filled their new house, making her family feel they belonged there. Her natural friendliness and gentle nature made each move an adventure. She was strong and resilient as her husband served two tours of duty in Vietnam and completed other assignments that left her head of the household, worried her life partner would not return. As her children got older and went to college, Rae returned to the banking world, tirelessly contributing to her children’s future. When her husband retired in 1973, Rae began a new life, living in Hot Springs on a small farm. But the travel bug bit again, and they made time for a camping tour of Alaska and Canada, eventually visiting all 50 states in her lifetime. In 1999, like a true momma bear, she came to the rescue during the illness of one of her grandchildren, moving from Hot Springs to Rogers so she would be there to help. She lived in Rogers the remainder of her life, making friends and inspiring goodness in others. Rae had many hobbies but most memorable to her family was her gift with a sewing machine. She was an accomplished seamstress and made many of her girl’s clothes as they grew. Rae also was also skilled at embroidery, cross stitch, knitting and crocheting. She completed many afghans, pillows and pictures that are still treasured by her family and friends. She also loved a good mystery and was an avid reader. Her love of animals, while not a hobby, was always a strong force in her life. She shared her home and heart with many lucky pets including Okie, Missy, Speck, JJ and Gypsy. Rae is preceded in death by her parents, brothers, and one grandchild. She is survived by her husband of 68 years her 3 children, 6 grandchildren, 5 great-grandchildren and a host of friends. Arrangements have been scheduled for December 27, 2019 at the Benton County Memorial Park with visitation at 12:00 pm and services at 12:30 pm. In lieu of flowers Rae asked that donations be made to Arkansas Children’s Northwest or Rogers Humane Society.